Hairdresser’s – from Steinau an der Straße
Once it was occupied by the local teacher, but now the house from Idstein is home to a historical hair salon originating from Steinau an der Straße. The floor plan of the hair salon is nearly identical to that of the building. Most of the furniture has been built before the First World War. The oldest piece of furniture, the washbasin to the right side of the dressing table, dates from around the turn of the century. Nikolaus Spielmann established this salon in 1890. When he had finished his apprenticeship as a hairdresser, he went to Paris as a journeyman, where he worked for a short amount of time. After his return, he earned the title of master craftsman of hairdressing and, just turned 20, opened his own shop as a barber and men’s hairdresser. A hair salon in the countryside usually operated in the evenings and on Sundays. This allowed for the hairdresser to practice agriculture on the side. Nikolaus Spielmann owned about three to four cows; two of them were draught animals used to cultivate his land. We suppose that the barber did not have a room designated to practicing his trade during his first business years. Instead, beards and hair were initially cut in the parental parlour. Spielmann furnished his shop little by little, as proven by the eclectic mix of shop fittings and furniture, which are still on display today. Heinrich, Nikolaus Spielmann’s son born in 1899, ran the shop until 1991. Lots of stories are still told about the “Spielmännje”. He was a true Steinau character and did the hair of his regulars in the salon up until his nineties.

An audiostation has been newly added to the original interior of Spielman’s salon: It lets you listen to a former regular talking about his visits to the hairdresser and shows a film clip from 1988, produced by the Hessian broadcasting corporation Hessischer Rundfunk about Heinrich Spielmann and the members of beard club Bartklub Gründau-Steinau. A small exhibition unit on craftsmanship and practicing agriculture on the side can be visited in the adjoining room.

History of the hairdressing trade
The profession of hairdressing as we know it didn’t exist until about 1900. In the early modern period, cutting hair and beards belonged to the tasks of barber surgeons, who operated bathhouses in cities or bigger villages. They not only offered bathing and shaving but also carried out minor surgical procedures like pulling teeth. In the 19th century, medicine and body care became more and more separated. In 1871, the association of German barbers, hairdressers and wigmakers, was founded in Berlin. People living in rural regions often kept on cutting their hair themselves or had a neighbour or someone known for their hair-cutting skills cut their hair for them.

This is about the time when Nikolaus Spielmann opened his hair salon. Although the furniture didn’t change much after the 1920s, the hairdresser’s equipment changed rapidly. In the beginning, shaving razor and scissors were the most important tools of the barber. Originally, shaving used to be the most important task of barbers in rural areas. Up until 1900, hair was cut using solely a comb and scissors. The next development brought the hair clippers, which made it possible to thin out thicker hair. That’s what made it possible to create short haircuts mechanically. Electrical devices first became more widespread in the 1930s. About this time, hair salons for women, beauty salons or parlours, appeared in the countryside. Women used to avoid artful hairstyles because of their impracticality for agricultural work. Girls usually wore their hair in plaits; women pulled their long hair into a bun. That way, the hair was protected from getting dirty and didn’t need to be washed as often. Starting with the 1930s, urban haircuts such as the bob and, later on, the perm became popular with women on the countryside. Sometimes it took some time for newly invented methods to become available in rural areas. A lot of the time old and new methods were practiced side by side.

From 2018 on, the history of the hairdressing trade will be displayed in a separate exhibition on the upper floor of the house from Idstein. 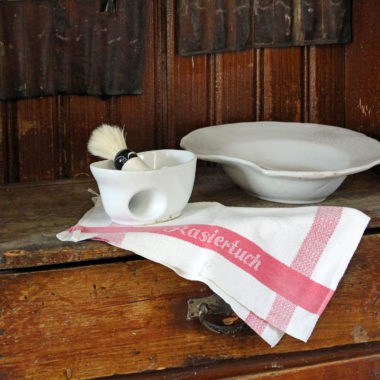 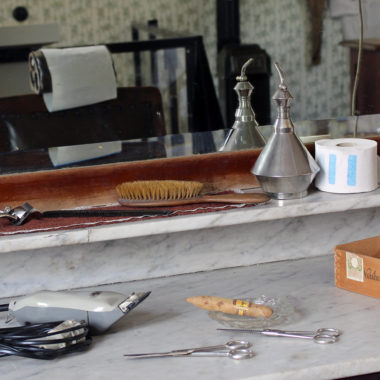 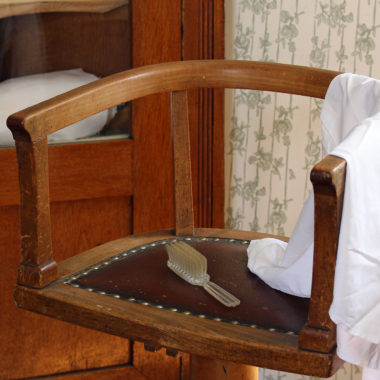