This simple utilitarian single-storey timber-frame construction with a basalt plinth from the Hesse Westerwald mountains was used into the 1950s as the community bakehouse. At the same time, the small room on the building’s left side served as the village schoolroom, ladder shed, general storage room, as well as refugee and pauper shelter. From the 16th century on, the authorities in Hesse forbade home baking for reasons of fire protection. This was intended to promote the institution of communal bakehouses. The existence of the Probbach communal bakehouse was first documented in 1785. Bread and cakes were prepared by the villagers at home and then taken to the bakehouse in wooden troughs and on baking sheets on their allotted baking days. The order in which the people could bake their goods – six loads were the daily maximum – was determined by lot the previous week. If you didn’t get your turn on one day you had to draw lots for another one. The first slot of the day was very unpopular, as it not only involved getting up very early to fire the oven, it also required more wood than the other slots. The women would bring their own wood from home to fire the oven. The communal bakehouse went out of use in the 1950s, when more and more households acquired electric or gas ovens. This was when the bakehouse portion of the House from Probbach came to acquire the status of the Bullesje among the village children, a scary place where the naughty purportedly would be locked up – a scare story most likely propagated by the children’s parents.

The right part of the building houses the museum’s historic bakery. Here, you can have a chat with our artisan baker or watch her work. 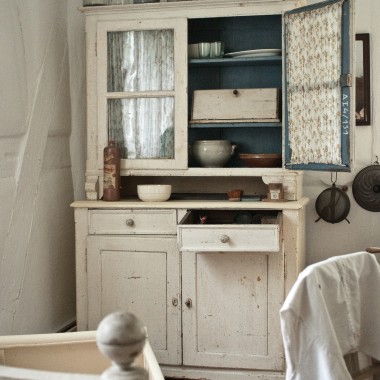