Replica with display depot on the history of threshing
Built: 2015

Threshing barns were simple, functional structures at the edges of villages, often built as cooperative projects of the less wealthy farmers of the village. The open version of this building type became common in Germany in the course of the increasing mechanisation of agriculture from the 1860s on. The barns served as shelter from weather and as storage for the new threshing machines, first operated by steam, then by electricity, that combined the various steps of threshing into a single task. They were particularly widespread in the 1880s, the 1920s and then again in the early 1950s. When combine harvesters became common, threshing sheds were no longer useful.

This threshing barn follows the typical forms of the early 1950s. The construction is such as was specified in the contemporary textbook Der Zimmerpolier (The Foreman Carpenter) by Fritz Kress, himself a carpenter. In spite of lengthy searching, none of the few surviving threshing barns in Hesse could be transferred to the museum. Those buildings that hadn’t long been demolished as useless had been altered, given walls, and were in use as storage or community buildings.

The depot features threshing machines and the development of their drives, from the movable steam engine (locomobile) to the electric engine wagon, and from the drawn combine harvester to the self-propelled machine of the 1950s and 1960s.

History of threshing
Arable farming in central Europe can be traced back to about 5,500 BC. Separating the grains from stalk and chaff is still a standard task after harvesting today. Beating the stalks to release the grains is known as threshing. The technology changed little over many centuries. A typical winter chore, the grain was beaten with flails over weeks on the barn’s threshing floor, an arduous work task that required many people and a lot of time.

After 1600, more and more attempts, some of them quite outlandish, were made to find ways of threshing grain mechanically, using water or animal-powered devices. Horses, mules and oxen pulled threshing sleds, rolls, or drums, or powered early threshing mechanisms by whims. The results were often less than satisfactory. The straw, a useful raw material to roof dwellings and farm buildings, was often too badly damaged to be suitable for this purpose. In addition, the grains were often separated from the ears, but neither cleaned nor sorted.

When winnowing machines were introduced in about 1700, these individual operations were optimised. Such crank-operated cleaning machines were found on most farms well into the 1960s.The first steam-powered threshing machines came onto the market after 1850. Threshing was now done immediately after harvest, so winter threshing was no longer done and thousands of farm labourers lost their living. Almost all of them moved into the cities which grew rapidly during industrialisation. There, they became industrial labourers, a new class of workers. When electricity came to the countryside from the 1920s onwards, threshing machines were more and more frequently powered by electrical engines. The tractor-drawn or self-propelled combine harvesters, which first arrived in Germany in the 1950s, finally changed the face of threshing forever. 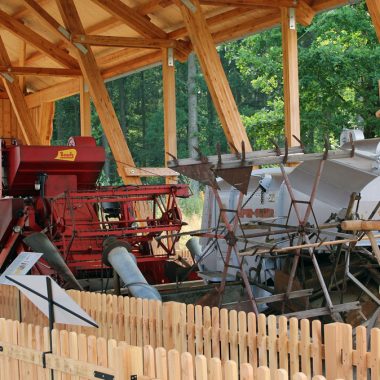 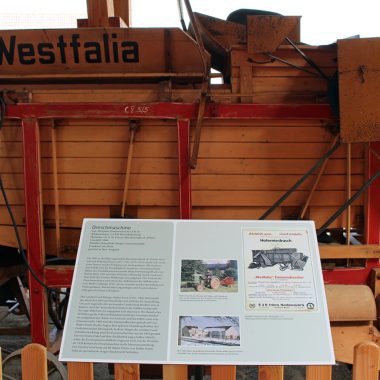 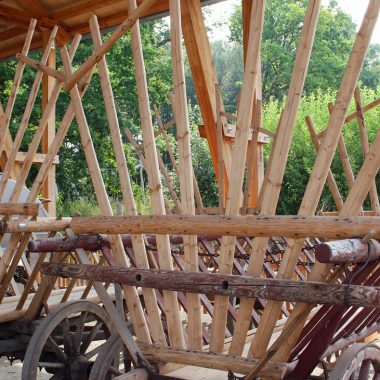