The residential building of the Die Engelbach domain was part of a very substantial farmstead. It was located north-east of the village of Solms, on a slope above the Fulda river. The existence of the farmstead is first documented in the years around 1590. In its original location, the house had an old vaulted cellar which was not transferred to the museum. In 1631, the property, which belonged to Hersfeld Abbey and which had until then been granted to vassals as a lifetime fief, was granted to Heinrich Andreas, a military commander in the abbey’s service, as a hereditary fief. In 1849, Friedrich Scheffer, minister in the Electorate of Hesse, bought the manor and ordered significant alterations to the farmstead and the grounds. Deutsche Bahn, the German state railways, bought the dwelling in 1979 and had the aboveground portion disassembled.

It was taken to the Open Air Museum in 1983. The Würzburg-Kassel high speed train line was later built on the land and the house made way for the entrance to one of the many tunnels along the route.

So far, only the exterior of the manor house has been completed, and the building is not yet accessible to visitors. The kitchen annexe had already been demolished in the original location; it was reconstructed following historical photographs. The reconstruction of the administration building, which directly joined the kitchen annexe, was no longer possible. 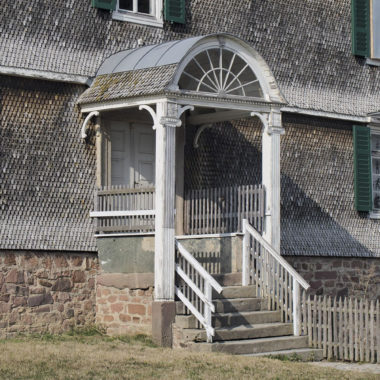 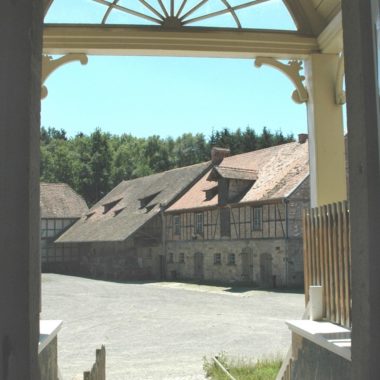