Melting out and processing iron demanded very high temperatures in the hearths. This requirement drove humans to make charcoal very early on in their cultural development. Until extraction of coal from deep below the ground became feasible, charcoal was in great demand everywhere. Thus, the trade of charcoal burners or colliers used to be very common, particularly in wooded areas.

The first step is levelling a circular area, the so-called charcoal plate. Several piles, about 2.5 metres long, are driven into the ground at its centre, creating a flue-like hollow which is later filled with charcoal to get the firing started. Logs are then arranged around the flue, always at a slight incline towards the centre so that they cannot topple outwards. Two storeys of logs are stacked up. Afterwards, the cone-shaped kiln is covered in a layer of foliage, followed by a layer of fresh pine brushwood, which provides a grip for the outermost layer, the so-called black mourning dress, a mixture of clay and charcoal dust. This triple cover prevents oxygen from getting into the kiln, which would simply burn down if feeding on oxygen. The collier controls the circulation of air by drilling and closing surface holes.

In the Open Air Museum, the charcoal kiln demonstration takes place twice a year. It occurs in a number of different stages (construction, lighting, smouldering and opening) and takes several days. 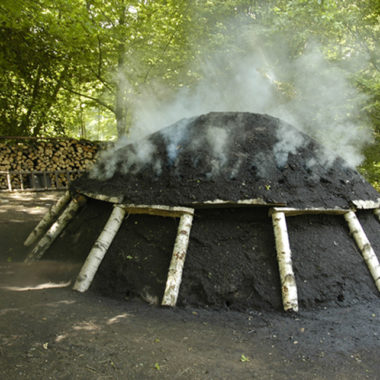