Lollar, which existed as a settlement as far back as the first half of the 13th century, was part of the Kirchberg court circuit along with at least eight other villages. The court circuit was congruent with Kirchberg parish. For centuries, the people of Lollar went to the church on Kirchberg hill for services. It took until 1480 before Lollar was given its first own chapel. Until a few decades ago, the old village centre remained around the small church’s original site; a square with a linden tree where a bakehouse and an old fire station joined the church.

The walls of the chapel are constructed of quarried stone, the corners of finished blocks. Four window openings on the south side and a window on the east side were given gothic tracery. The steep gable roof with beavertail tiles is crowned by a slate-clad ridge turret with abat-sons. Its spire bears a cross with a gilded weathercock. The roof construction including the turret dates back to the 15th century. The older of the two bells bears the date 1479, the younger 1516. Today, they are hung in the graveyard chapel in Lollar. For the reassembled chapel in the museum, two new bells were cast in 1984. The chapel was erected on a rectangular floor plan without a sanctuary.

A tabernacle recess near the altar is an indication of the Catholic mass having been celebrated prior to the Protestant reformation. The flat coffered ceiling, reconstructed in 1934 based on historical evidence, rests on a central girder supported by two wooden posts. The western post is presumably a relic of the original structure, whereas the eastern post, which supports the ridge turret, was added in around 1600. Thanks to the population growth the number of worshippers rose beginning in the second half of the 16th century, so that the number of seats had to be increased repeatedly by adding galleries. The west gallery was added in around 1600, the north gallery in the 18th century, and the east gallery in the 19th century. The last two as well as the pews were omitted from reassembly in the museum, since the intention was to recreate the visual aspect of the church in around 1600. Since there was no historic evidence relating to the floor at that time, it was tiled with new decorative tiles.

Because its flock had grown significantly, the Kirchberg parish was given an assistant minister in 1909 who resided in Lollar. In 1949, this assistant ministry was elevated to a full parish, Kirchberg II, with the parish church in Lollar. A new, larger church was consecrated in 1959. From then on, the old Lollar chapel stood empty until it was disassembled in 1972 and reassembled in the Open Air Museum between 1982 and 1984. Here, it is used for religious services and weddings. 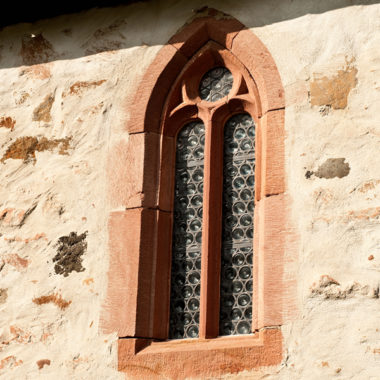 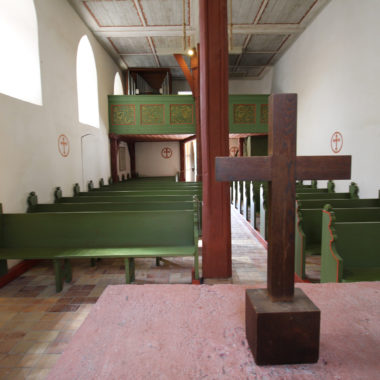