The church had originally been a secular building, converted into a chapel as early as the Thirty Years’ War. The old bell bears the date 1626. In 1775, the church was extended and redecorated. The ridge turret with its pointed spire and the sanctuary we see today were also added at that time. The two arched windows clearly show the extension, while the original structure has smaller windows arranged irregularly. The gallery supported by marbled wooden pillars features baroque paintings of the evangelists and apostles as well as scenes from the life of Jesus.

The church was built for 60 to 80 worshippers and had become far too small by 1950. The women’s pews on the ground floor were instruments of torture, the men above banged their heads on the ceiling, the air was insufferable, as a churchgoer vividly remembers. For this reason, services were moved to the village community centre between 1950 and 1960 while a new church was erected at a different site. Until 1931, Niederhörlen was part of Breidenbach parish, which comprised ten villages in 1774 already. Services were held in Breidenbach every Sunday. Walking the seven kilometres there from Niederhörlen took 1½ hours. This is why Eucharist services were held two to three times a year on special occasions in Niederhörlen. The Niederhörlen church is among the first buildings reassembled at Hessenpark Open Air Museum. The foundation stone was laid in 1974.

The churchyard next to the Niederhörlen church is not a reconstruction of an existing site, but is an idealised representation of historic burial sites. The tombstones provide an overview of the funerary culture of the last 150 years. They come from two graveyards, one on Christenberg hill and the other in Niederasphe. On the grass-covered burial mounds, tombs made out of wood, stone and cast iron serve the remembrance of the dead. Ornamental and floral motifs decorate the tombstones and crosses. Boxwood, ivy, periwinkle, sempervivum, rosemary, and lemon verbena are medicinal and decorative plants common in country gardens; here, they serve as floral decoration. The last two plants, strongly aromatic, were also intended to neutralize the vapours rising from the graves.

The reconstructed tombstone of Catharina Krieg is particularly noteworthy. It is painted and features a red heart in the arched section at the top of the tombstone. The heart is typical for the graves of married woman; alternatively, it is a symbol of the Catholic practice of the adoration of the Sacred Heart, common in Protestant denominations, too. The tomb inscription tells us that it was erected for three people: Catharina Krieg, her husband and her friend. In Hesse, the term friend referred to a relative, it was not a designation commonly used for non-related associates. 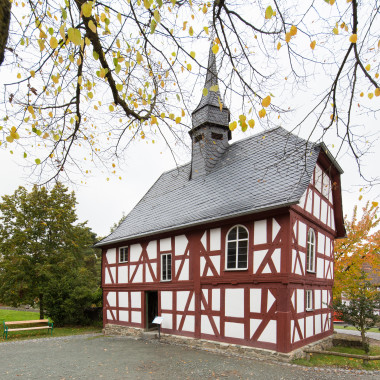 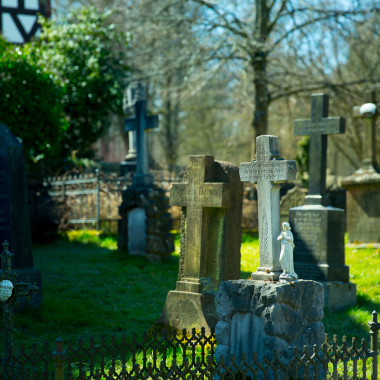 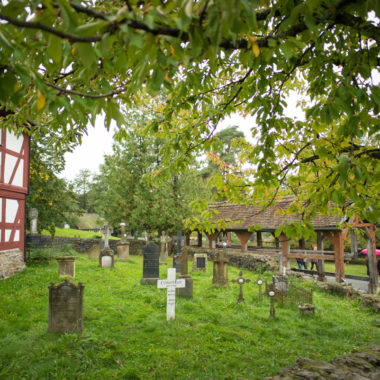