In its original shape, this house, built in 1735, is one of the Low German longhouses frequently to be encountered in the region. They all feature living and working spaces as well as space for livestock under a shared roof. With its central access though its threshing floor, also for wagons, and the living quarters off to one side it also possesses characteristics of the Diemelland house. The impressive two-storey house from today’s Kassel county is striking even from afar thanks to its distinctive yellow colour and the decorative gable jutting out over the entrance. Johann Conrad Austermühle, who commissioned this building, was one of the wealthier villagers according to the 1769 land registry, since he had been able to acquire some substantial pieces of arable land in addition to his farmstead.

The way this building was used throughout its history is unique: Unlike the regions where impartible inheritance was custom and farms were therefore passed on in their entirety, Ostheim was a village which was subject to partible inheritance laws. Thus, Johann Heinrich Thöne VI, the farmstead’s owner in 1842, split his property into equal halves. A double farmstead came into being; two separate properties with the boundary passing straight down the centre of the central hallway. The left half of house, farm, and garden, was handed down to Anna Katharina Thomas, his widowed daughter, while the right half went to his son, Johannes Thöne II. In contrast to impartible inheritance, the landholding of an inherited property continually decreases. Every time property is passed on, smaller parcels of land come into being. Finally, this process led to impoverishment and emigration in this region.

As a direct consequence of this inheritance practice, one of the lateral zones of the house was no longer used for farming purposes, as would have been customary with the Low German longhouse, but as living quarters. The two owners shared the large hallway as a working and utility zone, the courtyard in front of the house and the kitchen garden in the back. Later, further buildings for livestock were erected here, and a barn and a small bake house in around 1920. On the ground floor, there was a heated parlour to the left, along with an unheated bedroom, a kitchen, a basement, half a threshing floor and a shed for four cows. On the first floor, there were another bedroom and a smoking room besides fodder and produce storerooms. The layout of the right half was largely identical.

In the Open Air Museum, the left half is used by the museum theatre, and the right side houses an indigo-dyeing workshop. 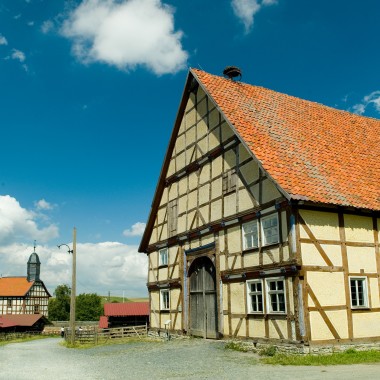 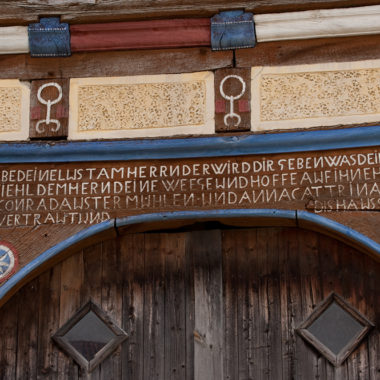