The brickyard at the Open Air Museum consists of a clay mixing facility, drying halls and a simple replicated clamp kiln. The mixing facility is an iron vat in the ground with a vertical staff and paddles in the middle, called a pugmill. Turned by a draught animal, the staff is set into motion, rotating the paddles through the clay in the vat. The mixed clay was then taken to the drying halls in trolleys running on tracks where the damp, hand-shaped clays were air-dried. Open wood, cast-iron or band-iron frames were used to shape the bricks. A skilful worker would manage about 3,000 bricks in ten hours in 1900, even more in piecework conditions. The air-dried bricks were then fired in a kiln. If no permanent kiln was available, they could be open-fired. To do so, a stack of dried bricks was set up on even ground. This stack was then covered in clay, with air vents allowing coal to be added and air to flow. The whole construction was lit and kept burning for days.

Such temporary clamp kilns were often set up near construction sites to save on transport costs. 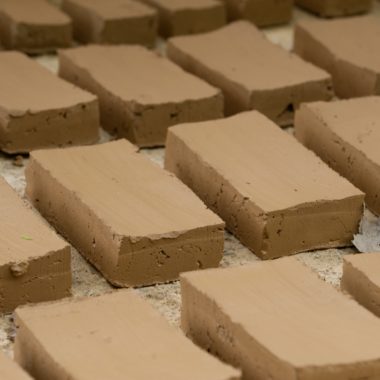 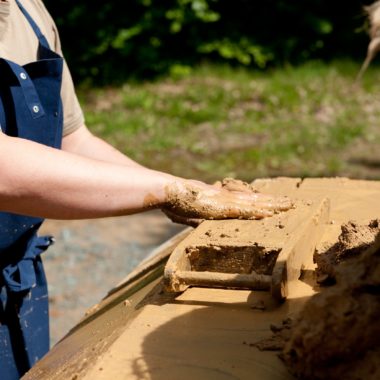