The blacksmith’s craft is one of the oldest, and for a long time it was also one of the most important crafts. A blacksmith’s diverse responsibilities covered a lot of ground. The village smith, a blacksmith or nailsmith, made almost all iron objects required, which ranged from nails through hooks, door fittings, fences, gates, funerary crucifixes, tools and iron hoops for cart wheels all the way to iron shoes for horses and cattle. In addition, a wide variety of specialised smiths developed over the years depending on local requirements and other conditions, such as smiths for chains, scythes, knives, axes, copperware or nails.

The most important of the smith’s tools and devices have always been the hammer, tongues, forge and anvil. A bellows besides the forge helps regulate the temperature of the fire. Depending on the material used and the technique applied, the metal is heated in the fire to 1,100 °C to 1,200 °C. Once the metal glows yellow, it can be beaten into shape with the hammer on the anvil. From the 14th century onwards, water-driven hammer mills and later motorized hammers in larger pre-industrial workshops made the smith’s work significantly easier. Manually shaping metal with hammers remained the standard technique well into the 1950s.

While almost every larger village featured at least one blacksmith in the last century, today’s situation is starkly different. Due to the largely industrial manufacturing of all the blacksmith’s products, the trade of the blacksmith has been waning since the 1950s. Manual shaping under heat (smithing) has almost disappeared as a full-time profession today. Even the tradesman’s designation of Schmied (smith) was changed to Metallgestalter (metal designer) in Germany in 1989. Only the farrier has remained, along with his tradesman’s designation of Hufbeschlagschmied (farrier). 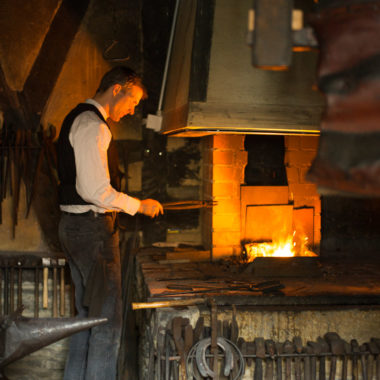 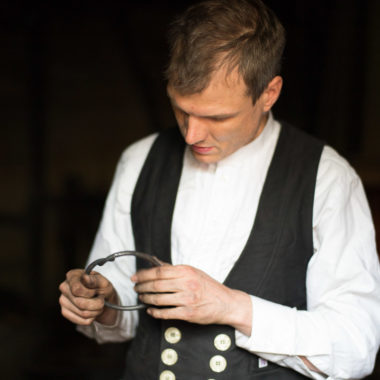 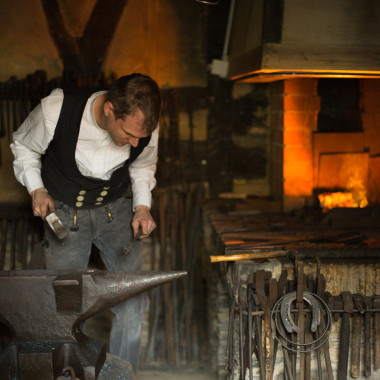